Over 70 people braved the rainy, windy, and chilly weather to attend a “Jobs not Cuts” rally in front of Congressman Gibson’s office in the Kinderhook Village Square. 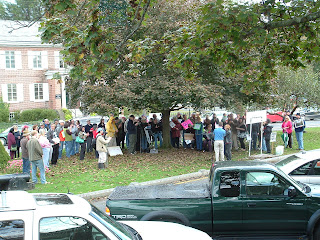 Homemade signs dramatized the frustration that was expressed in the speeches: 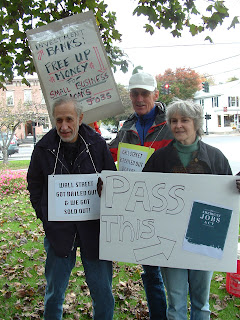 The Speakers ranged from SUNY student Devin McConnell, who was the rally leader, to a teacher,  a  businessman, a union member and unemployed.  Mike Lonigro, President of Upper Hudson Central Labor Council said of the rally: “We’ve lost 7 million jobs since 2008.  Congressman Gibson and his colleagues need pass the President’s jobs bill without delay.  Inaction is not an option; we need to put people back to work!”
Blue Carriker of Upper Hudson Planned Parenthood, decried Congressman Gibson and the GOP lead House of Representation avoiding and ignoring jobs bills and instead focusing again on limiting women  health choices.
Lee Jamison, a Social Worker from Stuyvesant held up Saturday’s Register Star front page article concerning employment cuts at COARC.  A candidate for Stuyvesant Supervisor, she also held up the following photo showing a “Bridge Closed” in her home town.  There are no plans for repair or replacement. 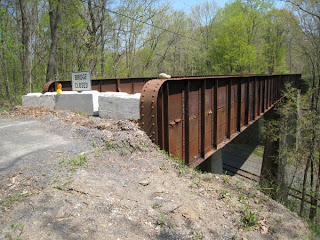